from 10.50 per person
90 minutes -
Check availability
One of the largest film and television studios in Germany invites you to some exciting discovery tours at the original venues of famous TV series and sets of successful movies. Depending on how deep you would like to immerse yourself in the film business, you can decide between the Film City guide (90 minutes duration), Film City Complete (4 hours duration) or the "filming classroom" (full-day program).
During the approx. 90-minute Film City tour, you will be taken through the production area and will hear about many exciting details of great movie hits. In some of the original sets, you can even reenact short movie scenes yourself. "Lights music action!"
Film City complete (4 hours duration) includes all of the above, the movie world of Bullyversum and the 4D cinema experience. In the BULLYVERSUM you will experience an interactive journey of discovery around the director, actor, comedian Michael Bully Herbig and his great cinema successes "The Shoe of the Manitu", "(T) Spaceship Surprise - Period 1" und "Lissi and the Wild Emperor". All cult shows!!
During the workshop "The filming Classroom" you will make your own film with the support of the Bavaria Film City professionals! Romance or action film – whatever movie you wish to film is entirely up to you. In addition you are guaranteed to get a lot of fun and interesting insights into the world of filmmaking. You will also learn first-hand how a film production functions. At the end of the workshop you will take home your own produced film on DVD! An unforgettable experience in the Bavaria Film City. 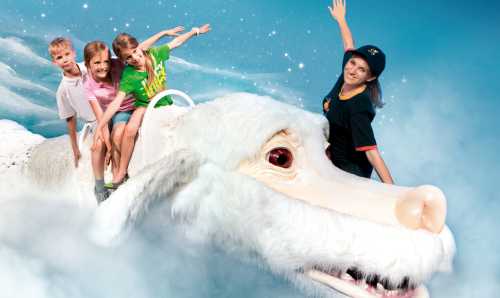