from 100.00 per group
60 minutes - 75 minutes
Check availability
In 1380, the Nuremberg rock-cut cellars were mentioned for the first time in a certificate of the brewing law. So everyone who brewed and sold beer in his house had to have a cellar. The cellars were then used for centuries as storage rooms for beer.
The sand stone, in which the citizens of the city over the centuries carved the cellars, proved to be extremely stable. Thanks to the clever construction with perfectly stacked pillars, the labyrinthine basement vaults even withstood the bombing of World War II. Many thousands of Nuremberg citizens sought protection here and thus survived the inferno that swept across the city on January 2nd,1945.
Today, the rocky paths are again used as storage and maturing areas for some beer specialties and beer distillates of the brewery “Hausbrauerei Altstadthof”.
During a group tour, you and a local guide will explore the labyrinthine corridors at the foot of the Kaiserburg. 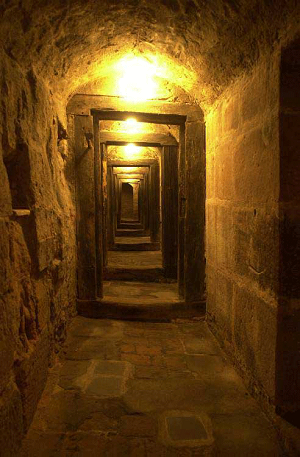