from 4.00 per person
1 hour
Check availability
The world's very first television tower is to be found in Stuttgart! For 60 years now the 217-metre-high tower has defied wind and weather. When building commenced, many of Stuttgart's inhabitants were doubtful as to whether the first ever tower to be constructed from reinforced concrete would hold. Inaugurated on 5th February 1956 it became a prototype that was imitated and refined all over the world – from Frankfurt and Dortmund to Johannesburg and Wuhan in China. Today the Television Tower is one of Stuttgart's best-known landmarks. No other place in Stuttgart can compete with the impressive panoramic views which the Tower affords over the city, the vineyards of the Neckar Valley and the Swabian countryside as far as the Alb, the Black Forest and the Odenwald. 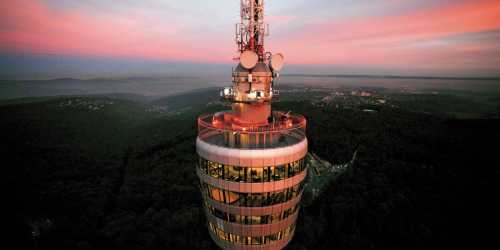